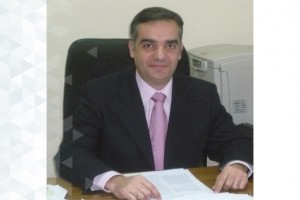 Manuel Ferre received the Engineering Degree and the Doctorate Degree (with honors) in Industrial Engineering in 1992 and 1997 respectively, from the ‘Universidad Politécnica de Madrid’. He is Full Professor with the Department of ‘Automation, Electronical and Electronic Engineering and Computer Science’ at the Universidad Politécnica de Madrid. He is a researcher at ‘Centre for Automation and Robotics (CAR) UPM-CSIC’, where he was Director from 2016 to 2020.
He started his research activity at UPM in 1990. In 1997, he worked as a PostDoc in the Human–Machine System Laboratory, Massachusetts Institute of Technology (MIT), Cambridge, USA. He has participated and coordinated more than 25 research projects in robotics and automatic control, both at national and international programs. He is currently participating as UPM responsible in 2 projects from the Horizon2020 (WPENS-Dones H2020-EuroFusion, BenchBalance from EuroBench-H2020), 1 project from the Spanish National Program (LuxBit - RTI2018-094346-B-I00), and 1 contract with private companies.
His research interests are focused on telerobotics, remote handling, automatic control, haptics and human-robot interaction. He has four patents on haptic devices and stereoscopic video cameras. He has published more than 150 conference and journal papers, 35 of them indexed at the JCR. He is co-editor of 2 books: Haptics: Perception, Devices and Scenarios (Springer 2008), and Advances in Telerobotics (Springer 2007). Prof. Ferre is coeditor of the ‘Springer Series on Touch and Haptic Systems’. He has served as Guest Editor of a IEEE RAS Magazine Special Issue on Telerobotics. He has participated in International Program Committees of several conferences highlighting some editions of IROS, ICRA and EuroHaptics. He was the Chairman of the First International Workshop on Telerobotics in 2004, and General Chair of EuroHaptics 2008 conference in Madrid. He is a member of the euRobotics as the representative of the UPM, and he serves as chair of the ‘Telerobotics and Teleoperation Topic Group’. He is also member of other scientific societies, such as IEEE Robotics & Automation Society where he served as chair of the ‘Technical Committee on Telerobotics’ from 2007 to 2010; and member of the EuroHaptics Society where he serves as Treasurer from its founding in 2006 to 2018.